Italian Women are unhappier than Spanish and German 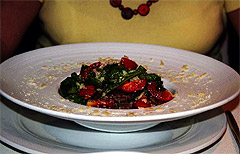 Despite the fact that the best Italian chefs are men, women does major kitchen work

Women in Italy are, perhaps, the unhappiest in Europe. This conclusion derives from the recently survey conducted by an independent analytical agency Women and Quality of Life.

Case study, which was aimed at identifying the number of women satisfied with their life in Europe, based on a survey of 4,000 women in five countries of the continent. The survey was conducted in five EU countries: UK, France, Germany, Spain and Italy.

The main reasons of dissatisfaction among Italian ladies is the economic crisis, problems with employment after maternity leave, as well as lack of kindergartens, according to telegraph.co.uk

Among the respondents about half of the Italian ladies said they regret that got married. Two thirds of women said they also regret that they got children.

The survey also showed that 70% of the Italian men have never used the oven. And another 95% had never taken out the dishes from the dishwasher.

Today Italy is among the countries with exceptionally well developed "macho" culture. Italian housewives are forced to do most of the housework and child care. According to the report published by the World Economic Forum in Davos, Italy is in the seventh ten in terms of "gender equality".