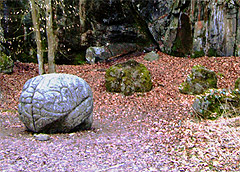 In the Italian province of La Spezia is located a small town of Sarzana. Here from 2 to 4 of September will be held one of the most unusual festivals in the world - Festival della Mente, which is translated as "Festival of mind."

The unusualness of this event is its theme. The fact is that the Festival della Mente is devoted to studies of creativity and dynamic processes that start in the human brain during the search for creative solutions and during the growth period, so the holiday is often called the Festival of Mind. This festival is unique and is held for the eighth time, and each year it becomes more popular. The program of the festival, the numbers of participants and visitors have greatly expanded (in comparison with previous years).

The festival della Mente 2011 will include meetings with artists, scientists, writers, designers and other members of the intellectual sphere to understand and explain how the processes of creative search can affect thinking and the way of life. According to the director of the Festival della Mente Giulia Cogoli, "This festival is a celebration of mind, free thought for those looking for tools to understand ourselves and the reality that surrounds us, for those who believe that culture is a key to improving their lives."

Della Mente festival will open on September 2, 2011 at 17 o'clock with the welcoming speech of Sarzana mayor Massimo Caleo on the Matteotti Square. Immediately after that right on the square will start the performance "as stone rivers" by Nightmare Theatre. During all three days of the festival the audience will be able to participate in such seminars and debates as Aesthetics and creativity between Asia and the West, On the concept of communities and networks, social networks and facebook, The Middle Age mind, and many others devoted to creative processes.