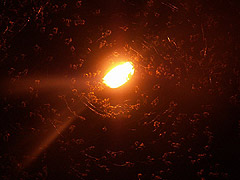 Every year 6 - 7 September, on the eve of the birth of the Virgin Mary Festa della Rificolona or Lantern Festival take place in Florence . Essentially, at night from 6th to 7th September along ancient streets of Florence is held a solemn procession of brightly dressed people who carry in hands long sticks with fixed paper lights at the ends (Rificolona).

History of this holiday embrases many legends. According to one, peasants from vicinity of Florence at autumn fair (the most important at year) wore the most elegant clothes and went to the road in order to come at dawn and take best places at fair. They light up the road by candles and due to gathered crowds of people the procession at night looked spectacular, and step-by-step citizens began to arrange similar processions annually. By the way, in Florence bright and festively dressed woman is still called "rificolona». According to another legend, which follows most of the citizens, Festa della Rificolona first took place August 2, 1555 in honor of victory Florence over Siena, when returning home at night soldiers hanged on their peaks paper lanterns and so went into the city.

Now Festa della Rificolona attracts a huge number of tourists, because of illuminated by hundreds of thousands candles nighttime Florence gain an unforgettable charm. Traditionally, the main procession starts from the Basilica of Santa Croce and ends at dawn in Piazza Santissima Annunziata. The children, who participate in procession, sing old song: