A new bridge over the Tiber in Rome 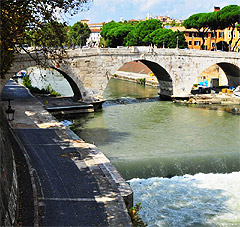 An old bridge over the Tiber in Rome

On September 20, 2011 outside Rome was held the grand opening of the bridge over the Tiber. The new bridge was opened in the town of Monterotondo, a Roman suburb located 26 kilometers from the capital.

The new bridge is quite long. Its length is more than 1 kilometer. At the opening of a unique transportation artery was present the Transport Minister of Italy Altero Matteoli. He was given the right to cut the symbolic ribbon in a solemn ceremony.

The new bridge is a part of a new section of the A1 highway, which was opened in August in the north part of Rome. Most of the new 6-way road section passes through the industrial park of Monterotondo. According to wantedinrome.com, the new bridge is an additional adornment of the transport artery that relieved the nearby highway.

The main "customers" of the new highway in Rome are expected to become the drivers of heavy trucks delivering goods to the industrial zone of Monterotondo. From now on they will not have to pass through the winding streets of Traverse del Grillo.

To build a 4-kilometer highway section with a new bridge Tecnis company, the general contractor of the object, spent 40 months and 33 million Euros.

The new highway will open additional opportunities not only for the logistics companies, but also for the ordinary drivers. Monterotondo area by means of the bridge over the Tiber will be connected with the commercial complex located in the areas of Castelnuovo and Capena.

It is worth noting that the new bridge would not be the only large-scale project to optimize traffic flow in the north part of Rome. In the near future here will be completed construction of a detour route through the Salaria suburb, which center currently suffers from overloaded roads. This road will branch off from the new bridge.

Monterotondo is a small town located on one of the most ancient routes to Rome - Via Salaria.