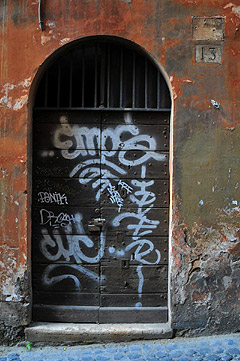 Rome will spend 1.6 million Euros to liquidation of the disorder effects

Rome city authorities started to count losses after the last Saturday protests against the government's economic policy and transnational corporations in the capital of Italy. During the march the part of the peaceful demonstrators decided to use the tactics of the so-called Black Bloc and to crush the central streets of Rome - Via Cavour and Via Emanuele Filiberto.

At the press conference held on Monday, the mayor of Rome Gianni Alemanno announced the amount necessary to restore the city. Thus, according to the mayor, the cost of restoration of the Roman streets will be about 1.6 million Euros, excluding the repair of private property. The bulk of the work will be carried out on the Via Cavour, Via Emanuele Filiberto, Via Merulana and Via Labicana.

The main objects of the protesters’ attacks were banks, buildings of the public institutions and private companies. The protests, which one of the most widespread and destructive in many years in Rome, were dispersed by the police using non-lethal weapons, including tear gas.

According to the official data, the total number of the riot’s victims is 135, of which 105 are police officers and 30 - protesters. As a result of the crackdown 12 people were arrested. At the same time the number of detainees subsequently increased due to the identification of participants via the video cameras installed on the central streets. Among the detainees are not only the Romans, but also the residents of Bari, Brindisi, Catania, Naples and other Italian cities.

Municipal authorities were cleaning the streets of Rome during the whole Sunday. The main work was performed by the companies Ama Roma and Servizi Giardini. Its employees removed graffiti, cleaned the streets from the burned cars, replaced broken road signs and damaged cables.