Discounts 2012 in Italy: sale season in Rome is opened 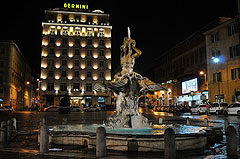 Night Rome
Summer sale season have just started on July 7, 2012 in Rome. It will last in the Italian capital until August 31. A lot of malls, boutiques and outlets will as usually participate in the sales campaign.

Discounts in Rome: as in previous years shops offer its customers the opportunity to buy fashionable clothes, accessories, gifts, equipment, and delicacies with a maximum price reduction up to 70%.

Sales in Italy are regulated by the regional legislation. Thus, in the Lazio region, which includes Rome, summer sale season will start on the first Saturday of July.

Despite the traditionally high shopping interest of foreigners in Rome, the Italians seem to decrease the demand this year. Opening of the sale season showed the decrease in volume by almost 15% compared with the previous year. Among the most affected were small shops, where demand fell by 25%. Outlets and malls in Rome, which, thanks to the scale of sales, can flexibly change its pricing policy, report about reducing of buying activity by 5-8% compared with 2011 year.

The most significantly reduced category among the Italians was buying of new clothing. According to a study conducted by Coldiretti/Swg, every second Italian intends to reduce, postpone or even abandon the idea of purchasing new clothes in the current sales season. However, only 9% said they would reduce children spendings.

Another study conducted by Federconsumatori showed that only every third Italian family go shopping during the sales season. The average check is accounted for 127 Euros.

National agency Istat also notes that every third Italian family was forced to reduce food costs due to the crisis.
Decline in domestic demand in Italy can be explained by strict austerity measures, which Mario Monti’s government was forced to implement. Under the new governmental plan, Italy will cut government spending by 26 billion Euros.