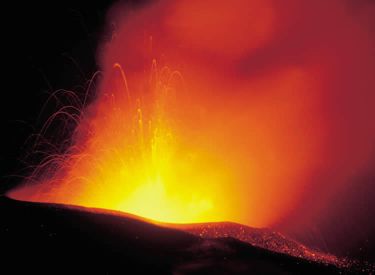 The history of volcanoes in Italy has more than 500.000 years. Today it is hard to imagine what are now located Sicily, the Gulf of Naples and a large number of small islands, where there is a quiet bay in Catania with its calm sea, from the waters of which the volcanoes reveal their mouths.

Volcanism in Italy shows that the array of the Apennine Mountains has not yet finished its fine establishment. An array of the Apennine Mountains is located in both north and south parts of the Italian peninsula. Even considering that wonderful Italian resort island of Sicily is located aside, its mountains, and above all the Etna with its never ending process of lava eruption refers to the Apennines massif. Wrinkling is in a state of isostatic equilibrium, which leads to vertical cracks in the crust and the creation of Horst and Graben structures. Thus, there are two mutually perpendicular systems of cracks, where magma can get to the top.

Active and quite long-term development of volcanoes in the south of the Italian resort island of Sicily is strongly supported by the aftershocks of the tectonic plates. Now we are talking about a system of cracks occurring in the north-east and south-western parts.

This crack system separates the Italian resort island of Sicily from the mainland and is visible through the Strait of Messina and the subsequent Ionian pits.

Along this crack zone, thanks to which the eastern coast of Sicily is well observed, are always return the dangerous earthquakes with centers at depths of 30-50 km. In Sicily near the plate boundary, where the African and Eurasian plates bend around each other, are created movement joints, which touch the upper mantle. Along these weak zones of rock masses of magma can get up.

Residents of this area, unfortunately, rarely show concern for the lava and volcanoes, and it often leads to very tragic consequences. As for the more dangerous situations, for example, look at Sicilians and the situation with the earthquake, as this can lead to the death of thousands of people within a few seconds.