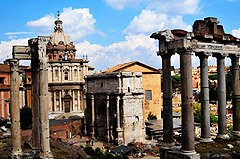 Summer in Rome promises to be hot, not only due to solar activity, but also due to the activity of other "stars". In the coming months on the concert stages of the Italian capital will play several concerts several world celebrities. And the choice is going to be really wide: from classical opera to rockers and rappers.

One of the major classical music events in Rome is Remember Pavarotti music festival, which is dedicated to the famous Italian tenor. Concerts of the festival will be held at Auditorium Conciliazione stage from June 8 to July 9, 2011.

The reverse side of the "musical coin" is frisky and energetic rockers 30 Second to Mars, who will present their concert program on the main hippodrome Rome Ippodromo Le Capannelle on June 18, 2011 at 19:00.

On the stage of the Music Park will also give a concert the legend of the American pop scene - Cyndi Lauper. Despite the fact that the peak of the popularity of Cindy Lauper was in 80-es, her albums are still popular in Italy. It is expected that at the concert Cyndi Lauper will please Roman audience by such proven songs as Time After Time and also songs from her latest album Memphis Blues. Cyndi Lauper’s concert in Rome will be held on 11 July 2011.

And finally, almost in the middle of summer, Rome is waiting for the famous show of Elton John. The concert of the Maestro will be held at the stage of the Music Park on July 13, 2011. The next day after Rome Sir Elton John will play a concert in another Italian city - Lucca.