Rome museums will dive into the music 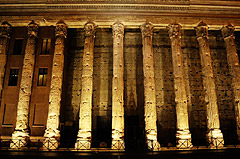 On the night from 19 to 20 November, 2011 an event will be held in the Museums in Music (Musei in Musica) in Rome, which inherited the popular concept of the "Night of Museums" adding to it live music.

The event "Museums in Music" will be held in Rome for the third time. This year it will be attended by about 60 bands and artists, who will present such styles as jazz, flamenco, classic, folk and electronic music. It is also worth noting that in addition to the museums in the event will take part other cultural institutions of Rome: exhibition centers, creative universities and international institutes, which for one night will be turned into the music scene.

Music fans during the Museums in Music will be able to choose the performance to their taste. It may be the classical music performance at the Napoleon Music Museum, or jazz in the Centrale Montemartini Industrial Museum. Jazz will also be presented at the National Gallery in the Barberini Palazzo and the Museum of Rome in the historical quarter of Trastevere.

Electronic music representatives can be found, for example, in the Macro Modern Art Gallery on Via Nizza. Here will play the representative of the British electronic underground Mira Calix. But the main electronic museum scene this night promises to be the modern art gallery on Via Francesco Crispi, where the electronic performance will coincide with the opening day (or rather night) of the gallery in 2003.

The unique presentation can be viewed in a 300-year old Casantanese library building. The concert for the harpsichord will be given by Cecilia Montanaro.

Among the institutions that will host performances of the Museums in Music participants are Romance Academy and the Embassy of Argentina in Italy.

The event "Museums in Music" begins in the museums of Rome on Saturday, November 19 at 20.00 and finishes at 1.00 on Sunday.