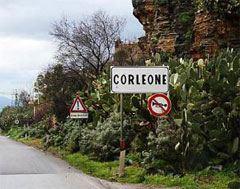 Corleone is the capital of the Cosa Nostra on Sicily
Mafia earns billions of dollars damaging the environment in Italy. Arsons of protected forests, illegal buildings on the coast, illegal traffic of rare animals listed in the Red Book - this is a short list of the activities, which the Italian criminal groups involved in to pursue their own interests. According to the telegraph.co.uk publication, mafiosos can earn up to 20 billion dollars a year on ecological threats.

Eco-mafia has become more active during the recent years. According to Legambiente, one of the most influential Italian organizations for the environmental protection, the number of crimes associated with harmful effects on nature in Italy has increased by 10%.

Among the regions particularly affected by the environmental harm are Sicily, Calabria, Campania and Apulia. These four regions of Italy are notorious for its criminal organizations, such as Cosa Nostra in Sicily and Ndrangeta in Calabria. They are accounted for most of the 34 thousand eco-crimes registered in the country. In the north of Italy the largest number of crimes is recorded in Tuscany. Another Italian region with high eco-crime rate is Sardinia.

Among the crimes that can be classified as "environmentally related" there is a growing number of illegal archeological excavations. As a result artifacts, many of which are highly valuable for the nation, get to the black market.

Garbage disposal is one of the main niches firmly occupied by the Mafia. Long-lasting crisis in Naples is just the tip of the iceberg. For example, in 2011 the total amount of waste that was dumped illegally in Italy is accounted at 346 thousand tons. Another big shock is the size of the illegal construction. The experts say about 25 thousand buildings, which were built without environmental impact assessment.

Despite the efforts of the Italian police in the fight against illegal builders, the situation still remains unchanged. The main reason is corrupted local authorities. As a result of the first half of 2012 18 local governments in Italy were dissolved on suspicion of having links with the criminal world.